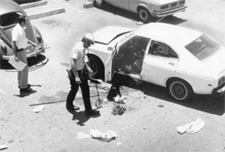 In 1976, Don Bolles was a newspaper reporter for the Arizona Republic investigating possible links between organized crime and high ranking state officials. On July 2nd, 1976, Bolles was leaving the Hotel Clarendon in his '76 Datsun 710 when six sticks of dynamite, which had been placed in the undercarriage of his car, exploded. Bolles died as a result of his injuries eleven days later. Many believe he was targeted by organized crime as a result of his investigative work. After the police investigation, the Datsun was towed to a police impound lot where it remained until it was obtained by the Newseum in 2004. The Newseum/ Freedom Forum Foundation, located in Washington D.C., acquired Bolles' 1976 Datsun 710 for an exhibit illustrating the dangers of reporting the news and to honor the life and work of Don Bolles. 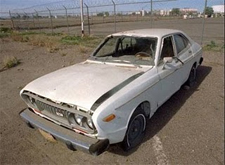 After being stored outside for 28 years on a police impound lot, the Datsun showed obvious signs of weathering and abandonment. The interior of the car had been disassembled by police investigators directly following the explosion and was never reinstalled. All of the components had been haphazardly stored inside the passenger compartment from that time forward. Much of the unpainted metal was covered in a thin layer of corrosion. The paint was severely oxidized and powdery, and every surface was covered in dust and debris. The shattered windshield continued to collapse into the interior, and the tires had deteriorated and gone flat. In addition to the damage caused by the initial crime and subsequent abandonment, desert wildlife had used some of the interior textiles for nesting, making the Datsun their home. 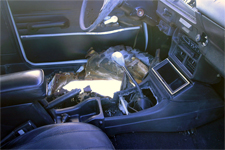 B.R. Howard & Associates, Inc. was contracted by the Newseum to conserve the automobile and prepare it for exhibition. Their primary objective was to return the Datsun to an appearance similar to that immediately after the crime had taken place. Before the conservation treatment began, the car was placed in a custom fabricated envelope and fumigated for 48 hours with carbon dioxide gas to eradicate any pests which may have infested the vehicle.

The Datsun was then thoroughly photo documented and cleaned.

With museum staffs approval, most interior pieces were treated and reinstalled in their original locations without trying to hide the damage that had taken place.

Loose pieces of glass from the windshield were removed and placed in archival storage, and remaining intact portion of the windshield was consolidated to prevent further degradation.

The Datsun's exterior was sprayed with a matted, reversible synthetic resin to consolidate the cracked and chalking paint. This resin was specifically formulated to prevent future paint loss without significantly altering the weathered appearance of the vehicle. Reproduction tires were acquired and mounted to replace the deteriorated originals.

When conservation procedures were complete, the Datsun was returned to an off-site Newseum storage facility prior to installation in the newly constructed exhibition galleries.

Click on any of the following images to enlarge